Being the last ‘big one’ before the World Cup,  the Quad Series had a lot to offer. With upset wins, a double extra time match and the overall winner being determined by goal difference, it didn’t disappoint.

Scorelines and drama-aside, we wanted to see if the right team won and why. So we compared all team averages from this series.

Here’s what we found.

England had the hometown advantage but were without their incumbent captain, Ama Agbeze.

Australia were without their leadership duo of Caitlin Bassett (entire series), Gabi Simpson (vs NZ and vs Eng), and also lost starting defender Courtney Bruce for their last game against England.

South Africa and New Zealand both looked to be at full strength, though the weight of expectation on the Kiwi’s was undeniably immense as they continue their rebuild under Noeline Taurua.

This is the easiest way to see how well the units have done their jobs. 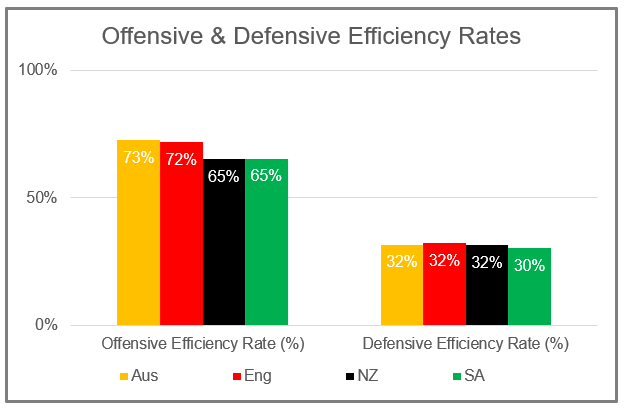 Australia and England were equally good at converting their possession into goals, just like New Zealand and South Africa were equally as good as each other.

Defensively, all teams performed relatively alike. There were no real points of difference here.

Australia and England shone purely through their offensive efforts, but the closeness of these measures across all four teams shows just how tight the race is between them now. 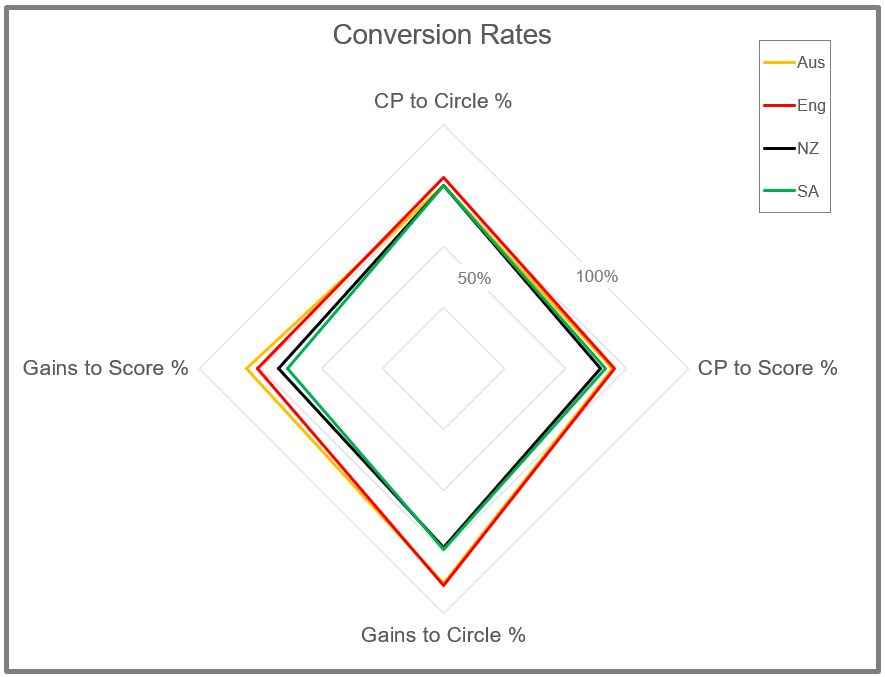 All teams were pretty well-matched on getting their Centre Pass ball into the circle.

Having said that, of all teams England had the greatest loss rate inside the circle off gained ball (the drop between Gains to Circle v Gains to Score). 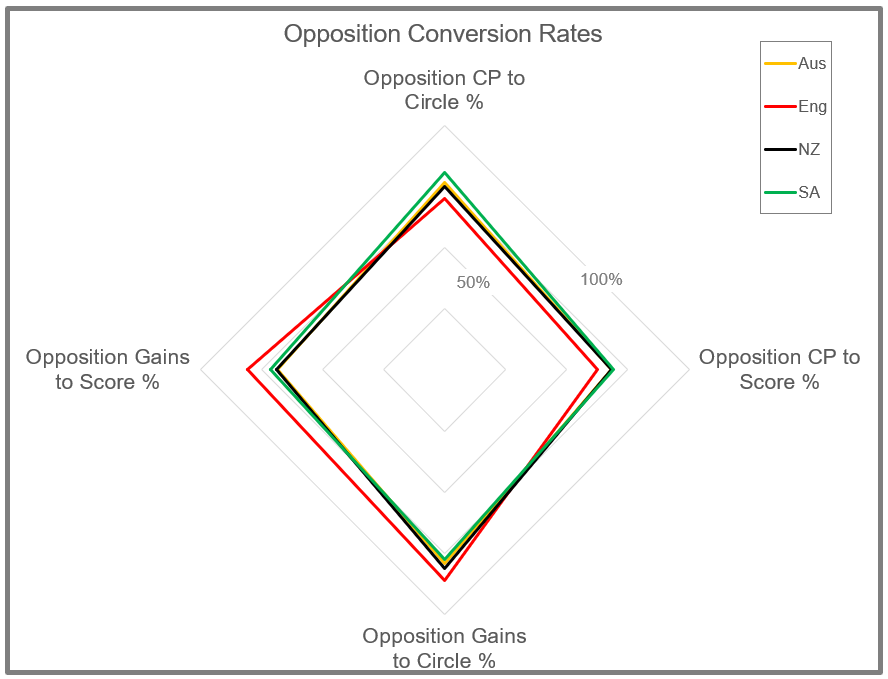 A mixed story here for England. They had the best Centre Pass defence, but the worst through court defence (defending an Opposition Gain).

Australia, New Zealand and South Africa were the opposite, yet all very similar.

No real points of difference defensively, or more specifically, no defensive unit stood out, reinforcing the close results we saw in the Defensive Efficiency measure. 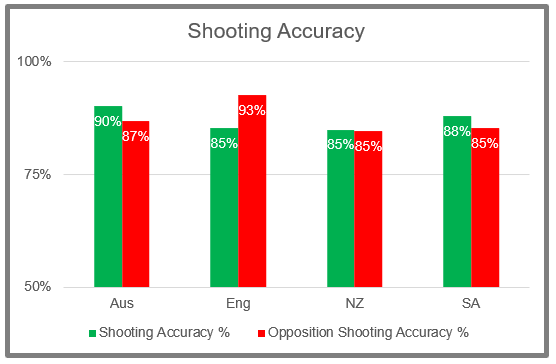 Australia was the most accurate team over the series – although all teams were pretty clustered together to be honest.

What does stand out is that England had the least effect on the opposition shot (!) – with the other teams averaging 93% against them.

Who would’ve thought that? 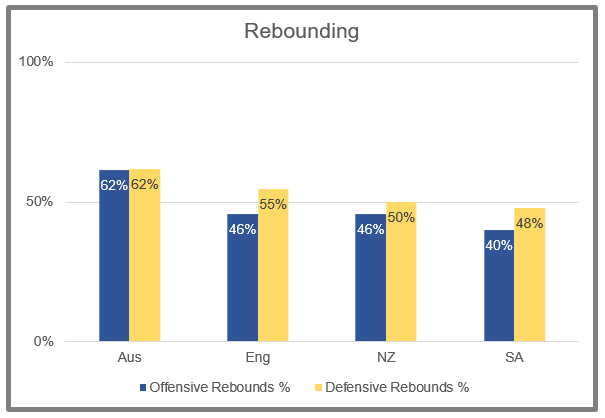 Australia was the most successful rebounding team – at both ends (although their high accuracy did mean they didn’t have as many offensive rebounding opportunities as the other teams.)

Despite having a poor effect on the shot, England were pretty good on the defensive rebounds that did come their way.

Offensive rebounding for South Africa was lowest of all teams. 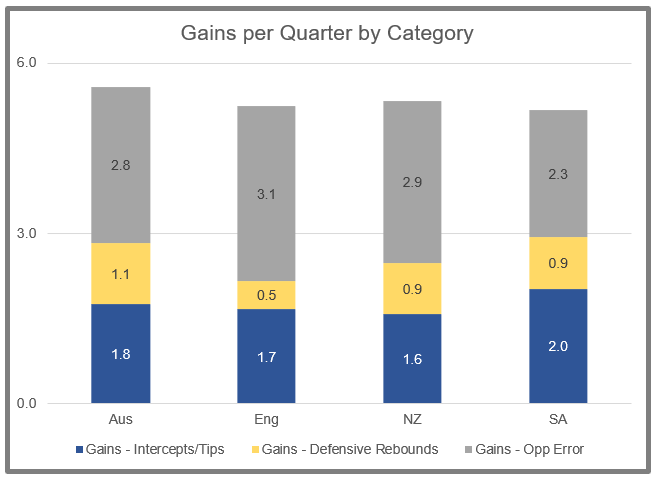 All teams were fairly similar in the amount of ball they were able to get on defence, with Australia slightly better than the rest.

South Africa gained the most ball through intercepts, but the least ball through opposition error. So they’re good at getting individual gains, but maybe not so good at sustained pressure that can force opposition teams into error.

Small gains through rebounds for England – but we’ve already discussed that.

Note: These are ‘per quarter’ averages, which means we’ve made adjustments for the extra time period played between New Zealand and South Africa. 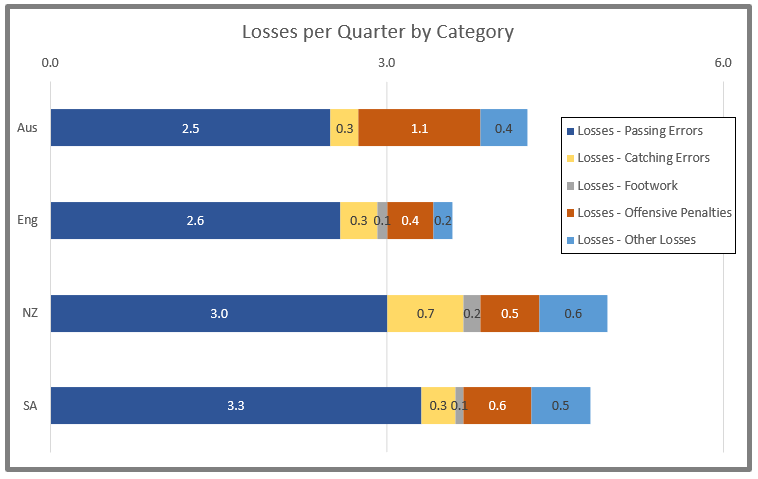 A high number of offensive penalties for Australia – a number of these were either Gretel Tippett in the circle, or their WA’s getting called when trying to create space for themselves on the line at the Centre Pass.

England had the least number of losses by far (and loss rate was under 3%) – they were playing some very safe netball, but still managing to play with creativity.

Again, note that these are per-quarter averages. 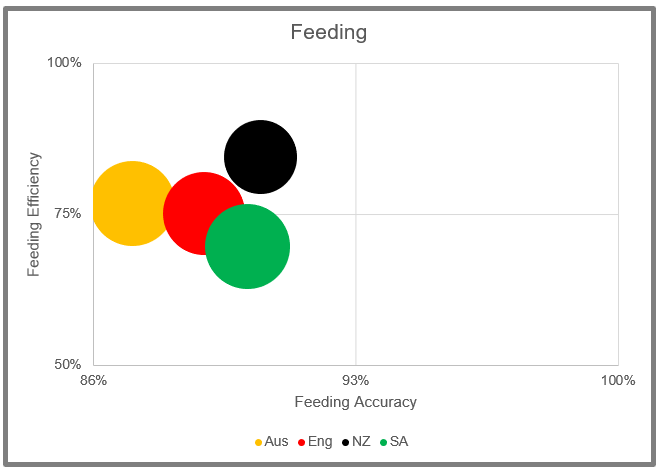 We view Feeding in two dimensions – Accuracy and Efficiency. In this graph, the bubble size is a reflection of the volume of successful feeds per quarter.

New Zealand were the most accurate and most efficient feeders, which means their shooters were more likely to shoot on the first opportunity.

South Africa were as accurate as New Zealand, however they were the least efficient. This means their shooters likely passed the ball back out (to the feeders) or offloaded (to the other shooter).

Imagine if they hadn’t done this against New Zealand?

Performance-wise, Australia were the most rounded team over the Quad Series and were deserving of their title.

Noting that they were somewhat under-strength by the end of the series, the prospect of a full-strength Australian team come World Cup should be a concern to the other teams.

Whilst New Zealand did very well offensively (high accuracy, high feeding accuracy and efficiency) and have made up ground, there’s room for improvement in their defensive efforts.

South Africa, although heroic in their defeat of England and extra time match against New Zealand, also have some kinks to work out. With a solid flow of ball to their shooters, getting the ball to shot will surely pay dividends.

England should be the most frustrated with their performance (yes, we said it). Having the lowest impact on the opposition shooters, a comparably ineffective through court defence and a slightly ‘off’ shooting accuracy, some tidying up is in order if they want to grab gold at home in July.

No doubt all teams will address these issues (and more). 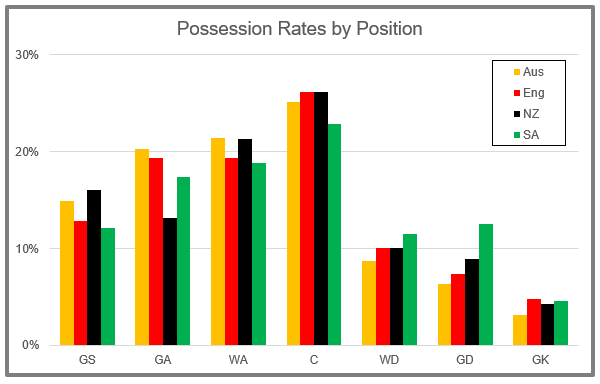 With most teams, GA had a higher possession rate than their GS partner. The exception being New Zealand, where it was the other way around. Intentional or not?

South Africa seemed to have a higher dependence on their WD and GD, possibly a reflection of the extra work being doing by those players in through court attack.

The Australian shooters had comparably high possession rates whilst their defenders were comparably low. 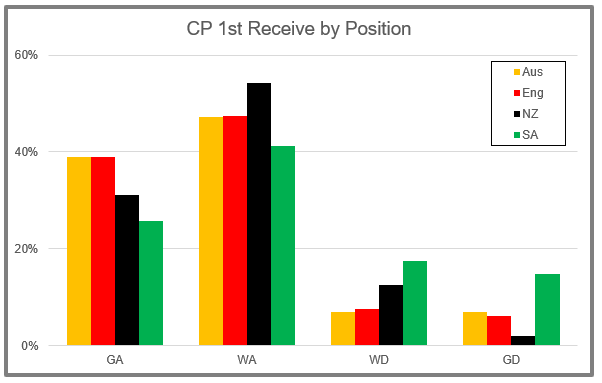 WA were the dominant Centre Pass receivers for all teams – but especially for New Zealand.

South Africa had a strong dependence on their defenders to receive the Centre Pass.

Very similar receiving patterns for England and Australia, who had little reliance on their defenders. 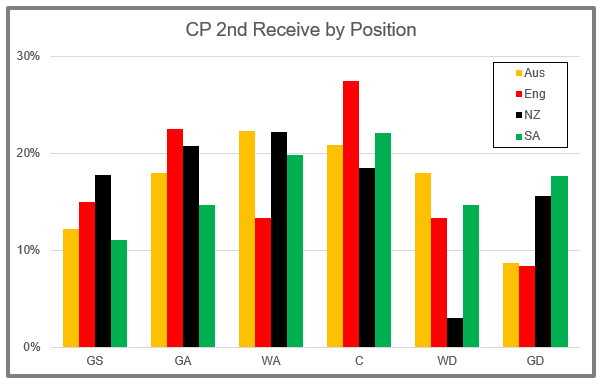 Quite different patterns here for all teams.

Moving GS for New Zealand and England mean they were often used for 2nd phase. Not so much for Australia and South Africa.

England had a high use of GA and C for 2nd phase.

South Africa used defence for 2nd phase quite a lot (as well as 1st phase, as mentioned) whilst New Zealand relied upon their GD more than WD.

And Australia had high use of their WD at 2nd phase. Double hmmm. 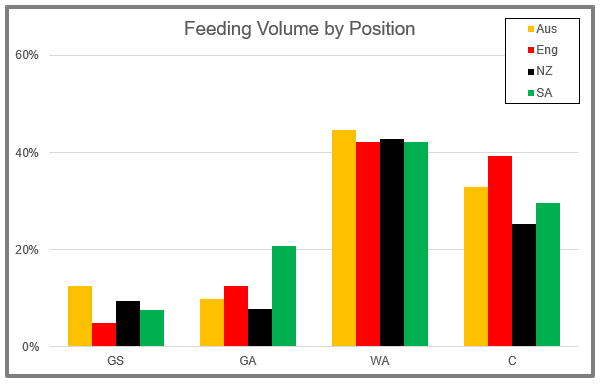 No surprises here, WA was the dominant feeder for all teams.

England C a more dominant feeder than other team C’s.

This is just a brief snapshot of the type of information we collect.  We have in depth data at both the team and individual level, which will be going up on the website very soon.